While producers of food, e.g. fruit or vegetables, or mineral water, place on the labels beautiful views or images of rural landscape, fur manufacturers have never shown what the production looks like “behind the scenes”. Many documents indicate that no matter which geographical area is concerned, farming conditions are inadequate. The major production of furs is still located in Europe; however, for a decade there has been a clear increase in shipping to Asia, mainly to China. Statistical data may cause confusion between the domination of China and Europe in fur industry, since the majority of farms are located in Europe, but the production of leather, its processing, sewing and final realization usually take place in China. The largest farms of fur animals can be found in Denmark – 30%, and then in China – 19% 83. 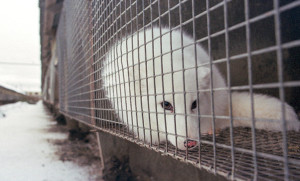 China, a country struggling with issues on breaches of human rights, is also far from respecting animal rights or environmental care. The international PETA organisation, best recognized for its spectacular investigations and discovering irregular treatment of animals, is probably at this moment the largest problem for fur producers, mainly from China. As it was documented on films made by PETA’s fake farm employees, and in reports of the Australian association of Lawyers for Animals published at the same time, in 2006 84, the suffering of foxes or raccoon dogs on Chinese farms is unimaginable. Films and photographs available on the Internet are hard to watch, and their description cannot depict the cruelty shown in the material. An emotionally developed person will not remain unmoved. Among drastic images we can find scenes of killing fur animals by throwing them against walls or on the ground, suffocating them with steel wire or hitting on the head with a blunt object. But the most shocking images are of raccoon dogs squirming of pain when their skin is taken off while they are still alive and aware of the situation, and their skinless bodies die slowly within a couple of minutes. Lack of proper law86, a kind of insensitivity of Asian society and assigned to this culture utilitarian approach towards animals are the main causes of animals tragedy. In addition to that, the demand for furs is growing, and therefore requires a larger production, which in turn results in a faster pace of the process and ihnumane slaughter methods. The scope of physical and psychological damage in the above documentation is so large that in 2006 the Chinese Information Agency Xinhua87 established that the State Forestry Administration will react to this problem and implement a series of regulations improving quality of fur animals’ life. However, the words turned out to be only promises – the situation has not improved. At the same time, a report by the EAST International/Swiss Animal Protection from 2005, updated in 2007, or studies by the Scientific Committee on Animal Health and Animal Welfare (SCAHAW) from 2011 88, confirmed the ongoing lack of animal rights in China. The documentation included cruelty towards animals and unimaginable manners of their slaughter. For those who remain sceptic against the above-mentioned facts, it is worth adding that the description did not refer to situations that could be regarded as out of the ordinary. 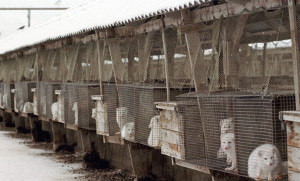 European farms are not better

The problem does not exist only in Asia or developing countries. Abuse can be also clearly seen on European farms. It is a standard procedure to keep foxes in tiny cages hanging in the air, with a perforated bottom, so the animal’s excrements would not stain its fur, and animals are usually kept at very low temperatures to stimulate the growth and density of their fur. Dirt, small spaces and noise are overwhelming. Lack of veterinarian care, cruel slaughter methods, scenes of abuse performered by employees – just to name a few issues documented by NGOs. In 2008, to the surprise of the Norwegian Government, also in this country inhumane handling of animals has been discovered, similar to that in China. It took place in one of the best fur farms located all over the country, where standards of farming and slaughter were so far perceived as the highest ones in the world89. This became a pretext for a public debate on ethics in fur production initiated by the Norwegian Government.

To summarize the above described conditions of farming and slaughter of fur animals, it is worth quoting an excerpt from the HSUS report on fur production in China, prepared for the American Federal Trade Commission:

“(…) Conditions in Chinese farms, where fur animals are kept, are nowhere close to elementary animals’ welfare. During their life and death they do not experience even the simplest acts of kindness. Instead, millions of animals are forced to experience the most terrible cruelty, or lack of dignity and basic needs – in the name of fashion.

(…) What we buy changes the world. Fur industry is right when saying that buying furs is an issue of choice. We strongly believe that this report will provide helpful information for fur enthusiasts to make a good decision (…)”91. 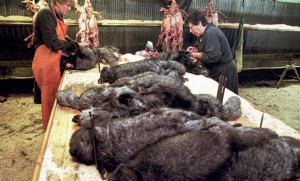 Farms and “discomfort” of animals

In the past, fur came from wild animals. Huntings were elements of daily life and culture, and their aim was to stop hunger and collect skins to prevent humans from harsh conditions. In the 18th century people started industrial breeding of animals, because human population became too large and furs from wild animals were not sufficient anymore. Minks and foxes were the first captured animals. They were forced to unnatural, stationary and strictly limited life. Since they did not have enough time in the evolution process to adapt to different existential conditions, we may say that their nature and lifestyle have been completely infringed upon. To the author Isaac Bashevis Singer, industrial farms are like “everlasting Treblinka”. The existence of these animals is limited to pure function, and their existential needs are limited to the lowest level, so they can only stay alive until slaughter time. It can be clearly seen on the example of a fox, whose living space is approx. 5 km2, although some sources say that in the case of unfriendly surroundings, its living space may extend to 50 km2. Young foxes disperse on the territory from 10 to even 400 km around their place of birth92. Foxes are genetically programmed to cover long distances, dig holes in search of food, contact with other foxes, that is ultimate behavioral freedom. Scientists agree that locking them in small 1.2 m2 cages (which is the case for the silver fox in Europe), constitutes for them physical and psychological torture 93. Imprisonment and destruction of social structure result in abnormal behaviour of almost all fur animal species on fur farms. Such strict limitation of their natural activities causes physical and psychological sicknesses. Symptoms include: alopecia, alergies, self-inflicted injuries, killing of young foxes, general aggression or death by starvation94. A large part of young foxes in farms die before they reach mature age, and half of them suffer from cannibalism95.